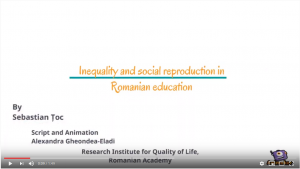 In this article, I describe the problem of educational inequalities in the Romanian education system, based on the research results published in the book “Education and class. Inequality and social reproduction in Romanian education” (Țoc 2018). In this book, I argued that equal educational opportunities are possible only by shifting the attention from sectoral educational policies[1], such as restructuring the curriculum, to an integrated approach in which social work policies for impoverished communities and fringe benefits for teachers in disadvantaged schools are implemented. Also, more resources should be allocated towards basic education (pre-primary, primary, and secondary) since spending at these levels is very low compared to the European average (European Commission 2017). At the same time, spending in higher education is above the European average, which means that even with the existing allocation of resources for public education more should be allocated towards the lowest levels of education than to university education.

Romanian education is not reaching its own goals

As poverty affects access to education, the Romanian educational system has assumed by the law that one of the objectives it must meet is to facilitate participation, at least in compulsory education. In other words, ideally, the school is responsible for transmitting the necessary competences needed to do well in a democratic society and a capitalist type of economic system (including through labor market integration).
Yet, achieving this goal has proven to be complicated. In the countries of the former East European communist bloc, including Romania, there was a rapid process of stratification and social polarization that followed the fall of the socialist system. Among the most significant problems was the reconfiguration of the social structure, the increase of poverty in general (including extreme poverty), and among children and youth, as well as the accentuation of economic and social inequalities (Eurostat, indicators: ilc_di11, ilc_di12, ilc_peps01). In addition to the planned change that followed the transition process and resulted in Romania’s integration into NATO and the EU (Pasti 2006, Zamfir 2004), there was a process of substantive transformation of the global division of labor. This process developed in the context of the transition to a “knowledge-based economy” in which even workers with high skills are poorly paid (Brown and Lauder 2010). Since the range of available jobs was very small, considering the restructuring of the economy and production automation, the most affected people had a low level of formal education. In addition, providing equal educational opportunities for their children became a difficult task bearing in mind that the education system did not encounter these issues during the former regime, which promoted the policy of total employment.

Although the universalization of access is discussed in education, including in tertiary education, ranking students based on results and conditioning their enrollment in certain high schools based on them are fundamental principles of the education system. However, these results are influenced by factors outside the school rather than by what happens in school[2]. The results of the PISA tests that are representative for the students aged 15 in Romania are influenced mainly by factors such as the socio-occupational status of the parents, the cultural capital of the family and to a much lesser extent of school resources (the most important factor was the existence of a deficit of educational resources such as computers and internet connection, insufficient materials in the library for instructional materials, etc.) (OECD 2014, 2016; Țoc 2016). Based on this, it may be inferred why programs aimed to facilitate access and participation in education have failed in the process of reducing educational inequalities. Social intervention programs assumed that the improvement of the infrastructure and the training of the teachers are sufficient to improve school results of the students coming from disadvantaged families, without taking into account the factors outside the school that affect participation in education (Florian and Țoc 2018). Therefore, instead of reducing educational inequalities, we are witnessing a process in which they tend to persist. This inference holds even if we measure educational inequalities through differences of results in national assessments between rural and urban students, Roma and the general population, and students with low and high socioeconomic status, or through the high number of students who drop out of school early or who do not have basic skills (the equivalent of functional illiteracy).

This situation is amplified by phenomena of social segregation that disadvantage the students from already underprivileged backgrounds (Crosnoe 2009, Owens 2010). The socio-economic and ethnic mixed schools and classes are desirable for the segregated, especially for those from disadvantaged areas. However, in high schools, the selection based on results obtained at the national assessment will likely be a social selection, especially at elite and underperforming high schools. The case study (Țoc 2018, pp. 171-242) was undertaken at an elite high school in Romania and illustrates that the socio-economic origin of the students is an essential criterion for maintaining the reputation of “good or elite high schools,” together with the awards obtained at national and international competitions. On the other hand, the activity in the classroom is less important. It validates the knowledge acquired by students from different forms of parallel education. These strategies are similar to those described by Reay et al. (2005) in their work about the stratification of the education system in Britain. In addition to the selection of the best performers, who are also homogeneous from a socio-cultural point of view, the same norms and values considered desirable for the school success of students are transmitted simultaneously by the family and the school: early specialization, work, and seriousness.  This process of creating the high-school “distinction” (Bourdieu 1984) has serious implications both because it legitimizes a conception about what a good school is, which is embedded in social class and because it contributes to the stratification of the high-school system, thus failing to provide equal opportunities for disadvantaged children.

In conclusion, educational policies aimed to reduce educational inequalities fail most likely because they disregard significant variables outside of the educational system and that the system of “best performers” actually facilitates access to educational resources mostly to students from families with both a certain socio-cultural background and the resources to access parallel forms of education.

To lower educational inequalities, policymakers should focus on early childhood education and primary education by increasing the funding especially in disadvantaged areas and increasing the salaries of educators and teachers, including incentives for working in the underprivileged areas. Also, raising standard of living through more effective social protection policies such as sustainably increasing the guaranteed minimum income, family support allowance, and heating aids would improve access to education of disadvantaged children.

[2] There is a whole range of scientific literature on equality of educational opportunities that was developed after the Coleman Report (1966).

Brown, Phillip and Hugh Lauder. (2010). Economic globalisation, skill formation and the consequences for higher education. In The Routledge International Handbook of the Sociology of Education, by Michael Apple, Stephen Ball and Luis Armando Gandin. London and New York: Routledge.

OECD. (2014). PISA 2012 Results in Focus. What 15-year-olds know and what they can do with what they know. OECD Publishing. Available online: https://www.oecd.org/pisa/keyfindings/pisa-2012-results-overview.pdf